Since you can’t get cavities there, tongues are often overlooked in oral health routines. Throughout the day bacteria accumulates in crevices allowing microorganisms to stick together on the surface of the tongue. Unfortunately, mouth rinses only destroy the outer cells of this biofilm.

Kill more bacteria in your mouth by brushing your tongue every time you brush your teeth. The steps are simple:

Some people prefer to use a tongue scraper from their local drugstore.

Whether you are fighting bad breath or cavities, tongue brushing is an easy addition to your daily dental routine. Make it a regular habit!

Midtown Atlanta is the cultural epicenter of Atlanta in addition to being home to Piedmont Periodontics. Beyond the curated museum galleries, vivid murals dot the landscape where talented local and international artists have covered everything from crosswalks to high rises.

Next time you visit our office, enjoy some of Atlanta’s best street art as you walk down 10th Street. Get your smartphone ready to capture the following: 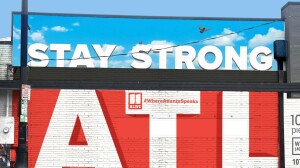 Stay Strong ATL @ 10th & Piedmont
Tes Arlette is a dynamic local designer often seen drinking coffee and kerning type. She is an art director by day, mural artist by night, and beekeeper in the wee hours of morning. 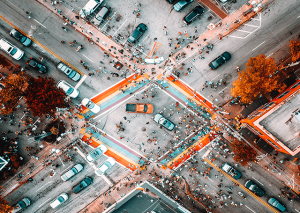 Rainbow Crosswalk @ 10th & Piedmont
Midtown’s colorful rainbow crosswalk serves as a symbol of unity and acceptance. It honors the victims of the 2016 Pulse nightclub shooting while playfully marking the area as the hub for Atlanta’s thriving LGBTQ culture. 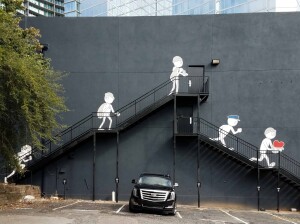 Kai Aspire @ 130 10th St NE
After attending L’école des Beaux Arts in Paris and the California Institute of Arts, Kai Aspire created his signature character “if” which stands for imaginary friend. “If” is a character of no color, sex or race, no physical/distinguishable traits that breaks all societal stereotypes and cultural divides. 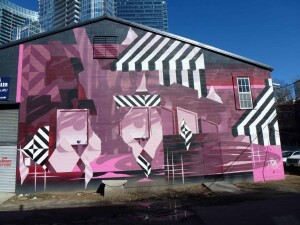 Trav @1021 Peachtree St NE
Los Angeles-based artist Trav explores the shifting role of the physical space as consumers are driven further into their devices. His dynamic collages pull together artifacts and inspirations from the golden era of retail and entertainment, paying homage to the stylized iconography of a bygone era. 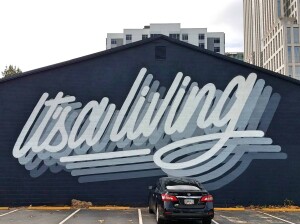 It’s a Living @130 10th St NE
“It’s a Living” is not just a statement but it is also a life philosophy for Ricardo Gonzalez, a designer and artist from Durango México currently living in Brooklyn. His signature script style can be easily recognized from large scale murals to commercial work for some of the biggest brands to a simple sticker in the streets. 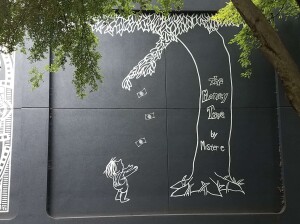 Mister E @1029 Peachtree St NE
Miami-based Mister E is known for his creative use of rainbow-colored 100 hundred dollar bills. His goal is to bridge the gap between the 1% and the 99%. 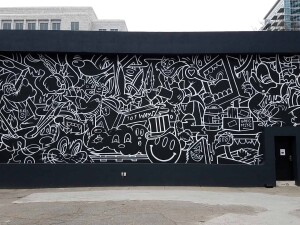 Greg Mike @1029 Peachtree St NE
Born and raised in Connecticut, “Greg Mike” Mensching is known for pieces that incorporate vivid explosions of incandescent color filtered through a Surrealist Pop Art perspective. In 2015, he founded the OuterSpace Project, an event series that merges public art, live music, design, action sports and culture that has produced over 85+ murals throughout the city of Atlanta.